That montage was mounted on a US version of the site by his designer, who wanted to use images that were evocative of the Middle East.

So apparently a woman diddling her rectum next to Islam's holiest of holies sprang to mind.

'And immediately people emailed me to tell me it was dangerous.'

The Dome of the Rock was quickly excised, but the beurette and her butthole are still there (or at least they were when I spoke with him), alongside a couple of veiled but otherwise topless women, some palm trees and… a scattering of decorative oil derricks.

Mistake or not, Muslim fundamentalists have harassed and killed people for less. 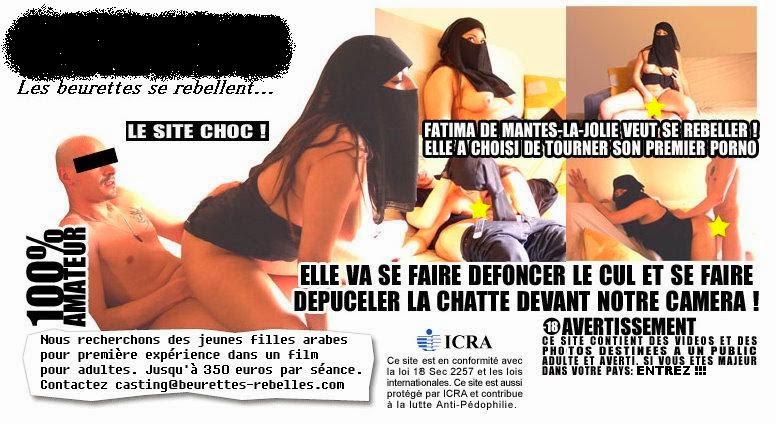 As we speak, rioters in the banlieues are fighting the police.

And not so long ago, protesters around the world were demanding death for a Danish cartoonist.

Not surprisingly, Milukman is keen to distance himself from those examples.

Well, except for that one time.

'My designer once put some Arabic writing on the body of a nude girl, and immediately people emailed us that some of the writing contained the name of Allah. It was an honest mistake.' He shrugs. 'How were we to know?'

Possibly by doing some basic research in the first place.

But one of the most surprising aspects about Milukman's potentially life-or-death pastime is just how little he (and his designer) know about Islamic culture.

He looks genuinely shocked—and not a little worried.

'Aisha was the name of Mohammed's wife?'

'There are lots of Aishas in the banlieues,' he mumbles pensively. 'Maybe we'll have to change that on the site.'

Salman Rushdie was ayatollahed for less.