For Beria, this institutionalized sadism took the form of kidnapping and raping young girls.

Professionally, he also turned sex into one of the KGB's most advanced weapons against the West.

'By using specially trained prostitute spies and combining their skills with the latest technological advances, the Soviet secret service has achieved the most refined form of sexpionage possible,' declared the author of what is in turn one of the most fascinating books from the Cold War era.

In Sexpionage: The Exploitation of Sex by Soviet Intelligence, David Lewis claimed to expose how the KGB trained its agents for work that was literally undercover—revealing, for instance, that the Russians called male sex spies 'ravens' and females… 'swallows.' 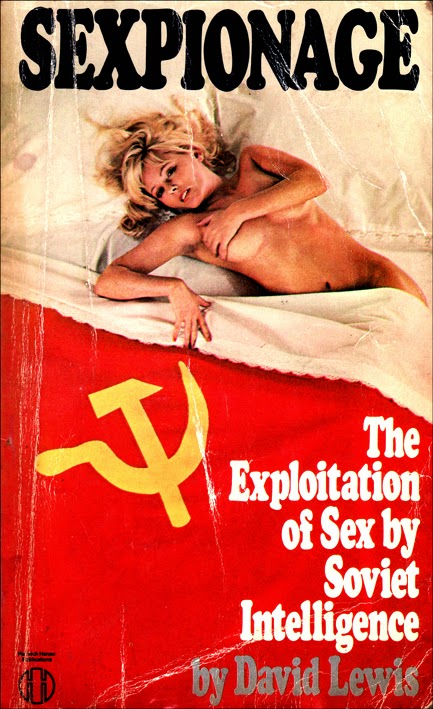 Though Lewis was billed as 'one of Britain's leading investigative reporters' in 1976, there's no way his book could have been completely accurate, simply because of its timing and the top-secrecy of its subject.

What's more, the photo on the jacket—a Caucasian jezebel beneath a Soviet flag bedcover—makes you wonder if it should carry a 'Warning: Parts of this book may have been sexed up.'

So more than thirty years afterwards, I tracked down the author to find out. Having documented Commie-v-Capitalist spy gadgets during the Cold War—my fave is the American 'breast transmitter' that fit under a fake nipple—Lewis is now a neuropsychologist who uses brain sensors to advise multinationals on how consumers think as they shop.

Back when he was researching Sexpionage, he tells me, it was hard to assess the information he dug up.

'I think a lot of it was exaggerated—not through my desire—but simply by what I was being told,' he says candidly.

'You just didn't know who to trust. Everybody could've been spinning you a yarn.'