For the most part, the protests against the invasion were fatality-free.

A unique eyewitness account comes from a sex writer who toured Czechoslovakia before, during and after the Prague Spring.

Mankoff's Lusty Europe is a vintage sex guide, one of those books you can't believe was ever published, let alone in 1972—and by a reputable publisher.

Having already ventured behind the Iron Curtain into East Berlin, author 'Allan Mankoff' (rhymes with…) also trawled the streets of Prague.

'There are no apparent pimps,' he concluded. 'The State is pimp.'

One 'beautiful young coed' was selling herself for thirty dollars a night. 'The Soviet Union will never let us go… and so, I shall sleep with a hundred men and then I shall have enough money to go to England.' 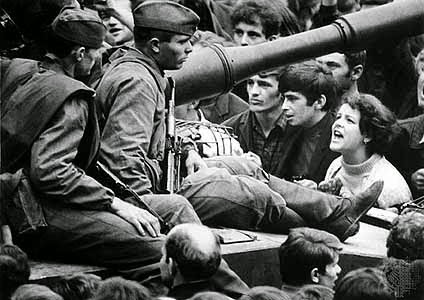 Mankoff also described the tense scene as a schoolgirl mooned Russian troops in the Old Town.

'For a frightening instant, one young guard who looks no more than seventeen teases the nipple of her heaving breast with his bayonet. Then he lowers it, grins, says something dirty in Russian, and the girl runs off in the direction of the macabre, death-mask likeness of Kafka which marks his former residence.'

One of the main goals of the Prague Spring had been to force the Party to punish those responsible for the purges and show trials of twenty years earlier.

The media had taken advantage of its freedom to try to rehabilitate a little-known martyr of democracy and genuine heroine of postwar Europe.

Milada Horakova had fought against the Nazis and spent nearly five years in concentration camps.


After the War, she resigned from parliament to protest against the Communist coup.

Accused of conspiring against the regime, she was arrested, tortured and sentenced to death in 1950.

Her last words under the gallows were: 'I have lost. I die like a soldier—with honor. I love my country and its people… I wish for you… I wish…'

And then the hangman cut her dead.