Noting my discomfort, John reckons we should double back to a place called Sweet Paradise, yet another oasis of kitsch in a concrete desert, a pseudo-tropical bar burrowed into a wintry grey street.

Not for the first time on my journey, I can't help but wonder: why do sex clubs have to be so tacky? Why do plastic palm trees and Pavlovian neon signal SEX to the male psyche?

Personally, I blame Gauguin, the artsy stockbroker who ditched his day job in Paris for a life of getting laid in paradise.

Unfortunately, he took his syphilis with him, sharing it with the fourteen-year-olds he purchased with sweets and alcohol until his running sores made him so repulsive even the poorest Tahitians wouldn't touch him.


His paintings, now in every major gallery on the planet, are like The Picture of Dorian Gray in reverse: immortalizing an innocent sexual Eden, whereas the reality was sordid and syphilis-ridden, thanks to colonialist cretins like him.

Since Gauguin, the tiki-plasticky look has been the décor de rigueur of dodgy clubs and cocktail bars around the world.

In its own way, Sweet Paradise, promising 'luxurious ambience and almost family atmosphere,' is more surreal—and depressing—than anything Kafka ever dreamt up.

Outside, it's Christmas in the Old Country; inside, it's the Land of the Yuletide Luau, with a full-scale beach hut in the corner adorned with a snowman and accompanying conifer. 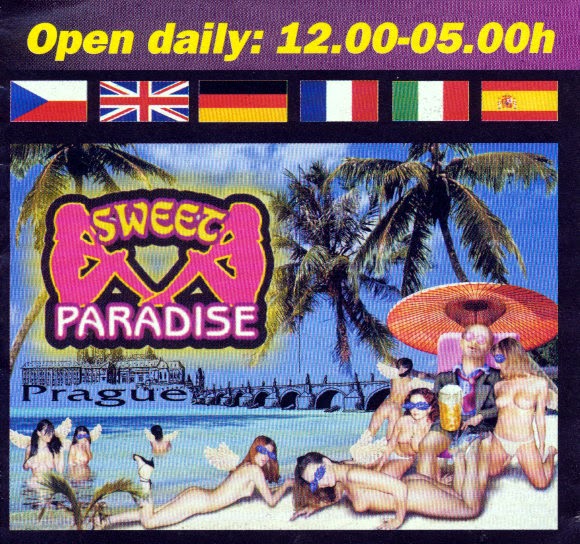 A dozen prostitutes sit drinking and smoking on the ledge lining the lounge, facing the few men on hand with expressions ranging from bored apprehension to fabricated lust.

John reckons he's getting the evil eye from the Queen of the Brothel, a pretty enough twenty-year-old, though her hair's so bleached you wonder if it's fallen out in clumps and been superglued back onto her head.

'She's one of the most popular girls here. Clients end up feeling sorry for her,' he laughs. 'She doesn't want to be here. She's got a kid.'

John knows this because he and Martina used to be an item.

'To have someone who you liked as a boyfriend, and who kind of liked you as a girlfriend, pimping you—well, it's not very nice.'